Software Developers from Eastern Europe in 2022: Which Country Suits Your Project?

Eastern Europe is now one of the world’s most favorable IT outsourcing destinations. Many leading tech companies such as Apple, Google, IBM, and Microsoft opened software development centers in Eastern Europe.

At the same time, smaller tech companies have also shifted their focus to Central and Eastern European developers. Though the custom software development rates in Poland, Ukraine, the Czech Republic, etc., are higher than in India or the Philippines, this cost still remains reasonable for the US or the UK.

Ukraine, Poland, and Romania are the most popular destinations when it comes to software development outsourcing in Eastern Europe, while Serbia, Macedonia, Bulgaria, Hungary, and Georgia are runner-uppers.

In 2014, the country’s new government started supporting investments from abroad. This led to a boost in investments in Ukrainian IT companies, which reached $630 million within the last 5 years. Kyiv, Lviv, and Kharkiv are the largest Ukrainian IT hubs.

As a member of the EU with the fastest growing economy, Poland offers favorable conditions for companies that are thinking of outsourcing software development.

The Romanian government had once created favorable tax conditions for companies providing software development services. The industry has rapidly grown and attracted global tech companies such as Microsoft, Ericsson, HP, and Huawei.

The country now has almost 100,000 IT professionals working at almost 20,000 companies, with an increment of 7,000 tech graduates annually.

In recent years, Eastern Europe has become a mainstream outsourcing location for software development because it offers an attractive cost-to-quality ratio, though not merely low rates like, say, you can find in India or the Philippines.

Geographically, all these countries are near each other and Western Europe. Moldova and Romania have pretty poor infrastructure, while Ukraine is constantly improving its transport and road infrastructure. The political situation in Eastern European countries varies but overall is fairly stable.

Eastern European software developers are proficient in English and have strong technical and soft skills.

** Please, remember, that hiring a senior developer with exceptional skills will always cost more than an average price.

The technical skills of Eastern European developers are well-regarded. All of the aforementioned countries were heavily influenced by, or indeed Former Republics of the Soviet Union, which left a legacy of relatively high-quality Technical Education (if not a little too specialized for contemporary tastes). The focus of education in Eastern Europe has made the transition from more of a hardware focus to more of a software focus in response to the former market expanding and latter contracting.

The English level of software developers is essential for successful cooperation. Overall, developers in all reviewed countries have a good grasp of English, which is a mandatory requirement for the IT industry.

Eastern European developers work primarily with international companies where a high or at least moderate proficiency in English is an essential requirement. The second most in-demand foreign language among developers in Poland is German, while French is almost as widespread as English in Romania.

To be up to date with new technologies, developers need to continue to self-educate and take additional training and courses. Opportunities for further education are becoming more widespread, administered privately by highly experienced IT industry practitioners, i.e., Lviv IT School.

Developers from Ukraine, Poland, Romania, and Moldova excel in web and custom software development. The programming skills of Eastern European developers can be measured using data from Hackerrank, and TopCoder, reputable sources in the IT industry.  Poland, Ukraine, and Romania rank highly on both Hackerrank and TopCoder. Moldova is ranked 28th on TopCoder. According to Bit Rebels, the most popular programming languages in Eastern Europe as of 2021 were JavaScript, Python, SQL, and Java.

To be more specific, let’s compare the annual rates for in-house Java developers and hourly rates for freelancers in different countries based on the data at Indeed.com, Glassdoor.com, and Payscale.com as of 2021.

Despite the communist past of all of these countries, developers’ culture can be defined as western and progressive. Most of the developers’ community are young people with more of an open mindset.  In the context of mentality and personality, Romanians and Moldavians tend to be more risk-averse, which sometimes leads to a lack of innovative approaches.

Another important thing to consider is the ability to synchronize and cooperate with the outsource developers. Engineers from Eastern Europe are located about 2 hours from London and 7 hours ahead of New York, allowing the established development process with both in-house and outsourced employees.

Even though the time difference may be somewhat inconvenient for workers, it is still possible to have several hours overlap during which you can schedule important meetings or spend time discussing the workflow and tasks the engineers need to do.

The talent pool size is an essential issue in choosing an outsourcing location for software development in Eastern Europe. It is often hard to estimate the number of software developers in exact numbers however local agencies tend to provide reports about their countries’ stats once in a few years.

The official statistics generally display the number of employees in IT and Communications. Among IT sector employees, there are also Q&A engineers, designers, business analysts, project and product managers, etc.

Based on the averages of figures reported, the ICT industry employs 401,000 in Poland, 140,000 in Romania, 285,000 — in Ukraine, and 24,500 in Moldova. Approximately half of these are software developers. There are also several software developers from Ukraine, for instance, who have chosen to work in Poland, as well as Moldovan developers, who are often recruited by Romanian software development companies.

Each of the observed countries has something specific to offer in terms of expertise in software development. Romania is well known for its engagement in fin-tech, Poland suits perfectly for R&D departments of global technology companies, Ukrainian developers are well prepared to work with the most cutting-edge technologies, and Moldova is a fairly good choice for midsize projects to outsource.

What are the best countries to outsource software development to in Eastern Europe?

According to experts, the three top locations for IT outsourcing in the Eastern European region are Poland, Romania, and Ukraine. Poland and Romania are members of the European Union; hence, the European standards in data protection and intellectual property are applied to each software development company in these countries. Ukraine, alternatively, is not a member of the EU but is known for its highly skilled IT specialists and affordable rates.

What online collaboration tools are required to work with remote developers?

Unlike traditional collaboration tools for remote working, such as Slack and Zoom, distributed development teams require lots of additional software. For instance, code management tools — GitLab and Bitbucket — are critical to the success of any product. In this blog post, we discuss all the collaboration tools essential for the effective cooperation of your dev team.

The best way to optimize this hiring process is to create a due-diligence checklist that will prevent you from losing sight of important points.

Usually, decisions regarding outsourcing software development to offshore locations (including Eastern Europe software outsourcing) are made based on recommendations or showcases. The birth and evolution of the British product GoPlanr.com can be an example of such a product success being developed by Ukrainian developers.

We at YouTeam make it easy and safe to find a perfectly matching team of engineers for any type of project. Over 400 vetted dev shops from 32 countries, including top software companies in Europe, are available on our marketplace. We can compile a list of candidates available to start working on your project next week in 48 hours or less. 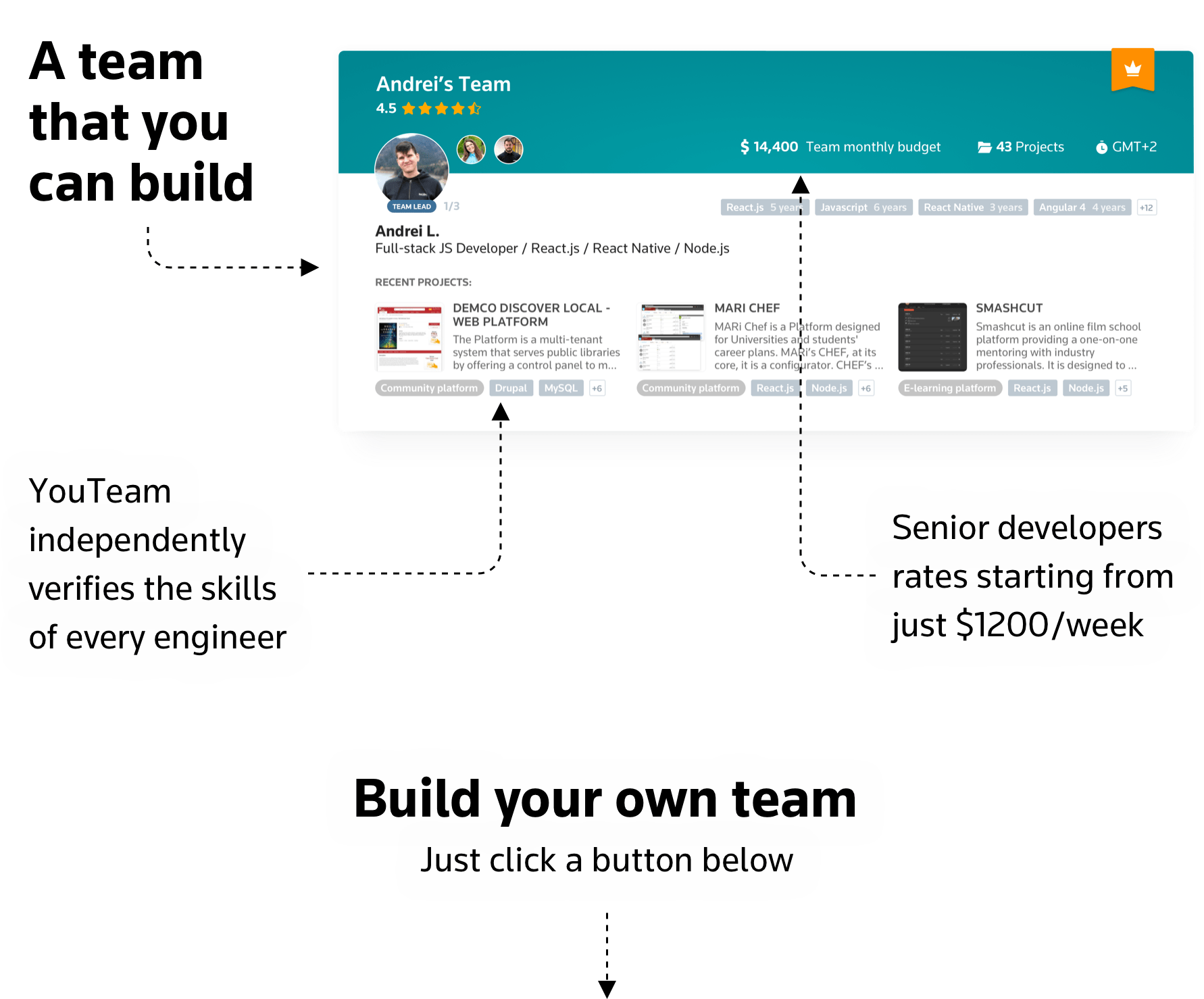 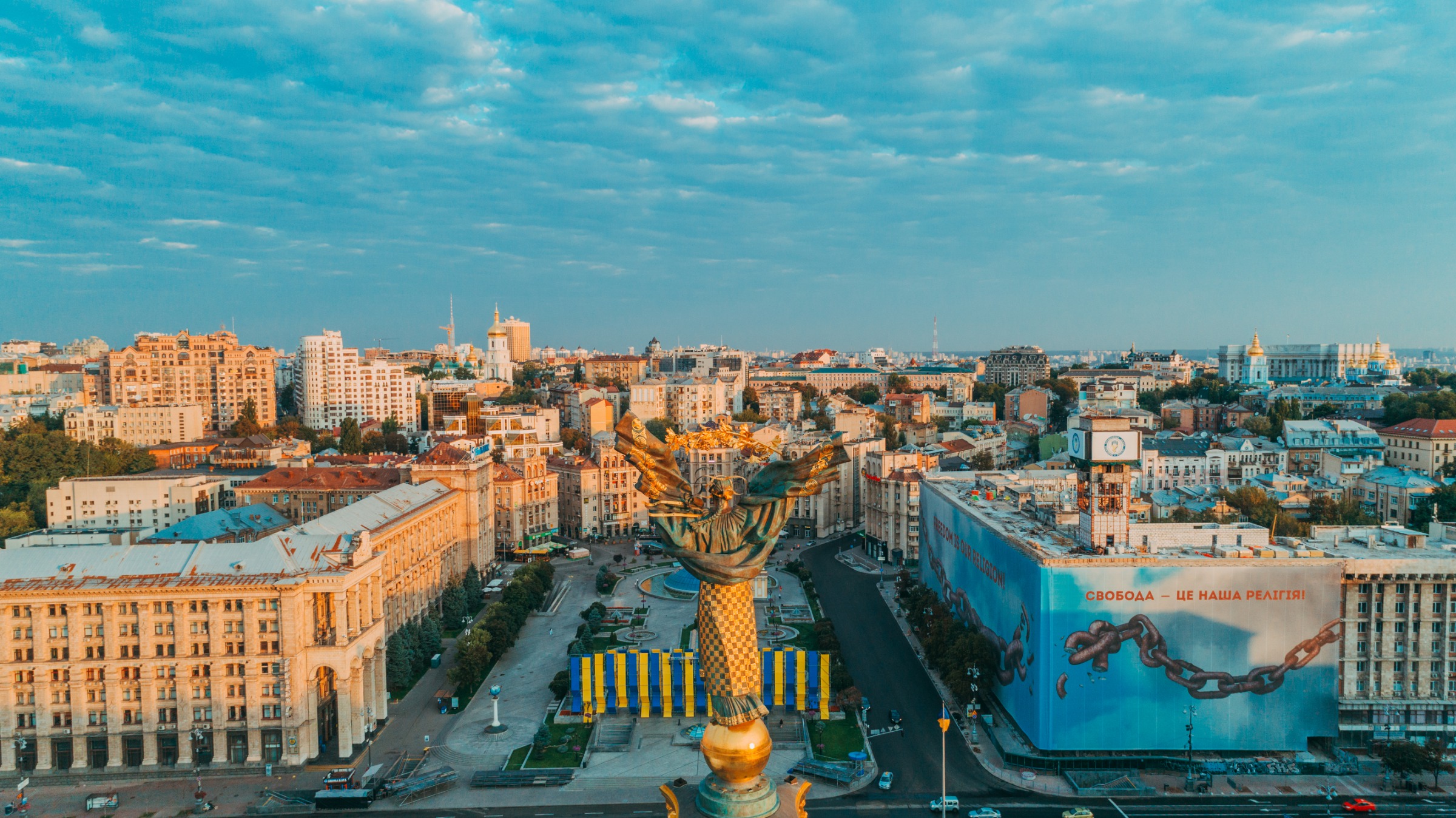