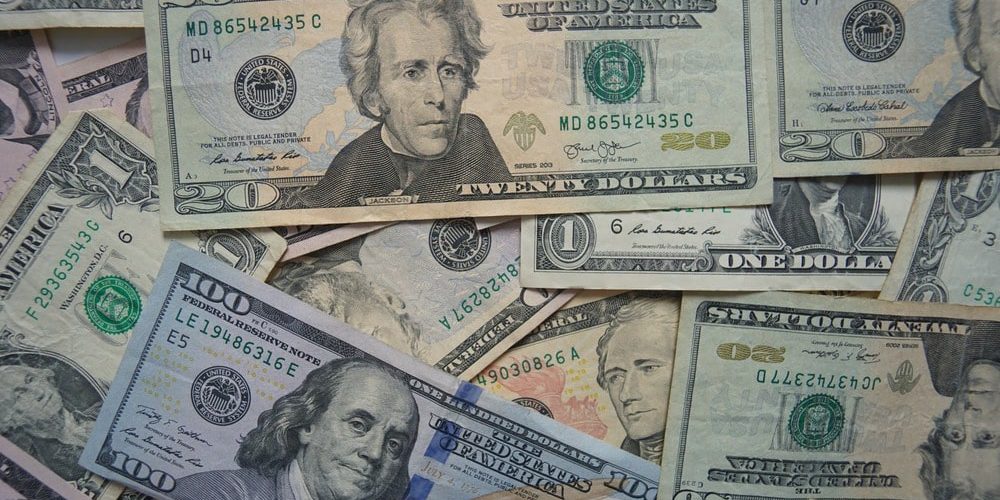 Due to the rapid changes in the tech hiring market and the high demand for skilled developers and data engineers, numerous companies are forced to steadily increase salaries. Attracting new professionals and retaining old ones has become difficult and expensive. The tech market is changing so fast that even IT salary statistics compiled a year ago are becoming irrelevant.

How Much Are Software Developers Paid in North America in 2022?

Developers based in the US and Canada have the highest average salaries in the world. This statistic is not news and applies to all categories of back-end and front-end developers. This results from many parameters like high demand, expensive cost of living, a basic income of a country, etc. Let us dive deeper into the most recent and reliable tech income study for North America.

Methodology: This complete salary guide was created after an extensive survey. The Robert Half team surveyed more than 500 project managers and 1000 tech employees in North America to help employers find the best candidates and decide what to offer when hiring a software developer.

What can be found in the report: The report includes an automatic salary calculator where employers can add the area of specialization, job category, job title, state, and city. This gives you access to the current salary range and median in your area. In addition, the study includes the top trends for 2022, the cities with the highest salaries such as San Francisco and New York, and a downloadable salary guide that analyses all the latest changes in the tech market.

The study includes a detailed list that can help hiring managers adjust the salaries according to the candidate’s expertise and the US city where the company is located.

Methodology: As with the US report, this income guide was created upon a recent extended survey of human resources managers and workers in Canada.

What can be found in the report: The report includes the tech hiring trends, salaries, benefits, and perks in Canada and helps hiring managers adjust the developers’ salaries accordingly. Likewise, the research identified how the hiring activity for developers (among other industries like healthcare, retail, and financial services) also continues to rise in Canada. 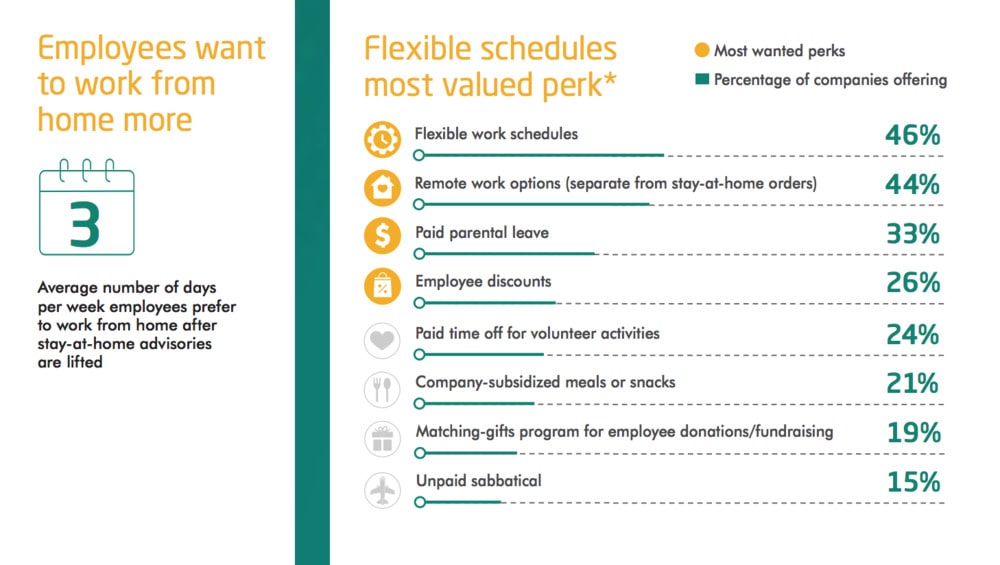 Most valued benefits and perks for 2022. 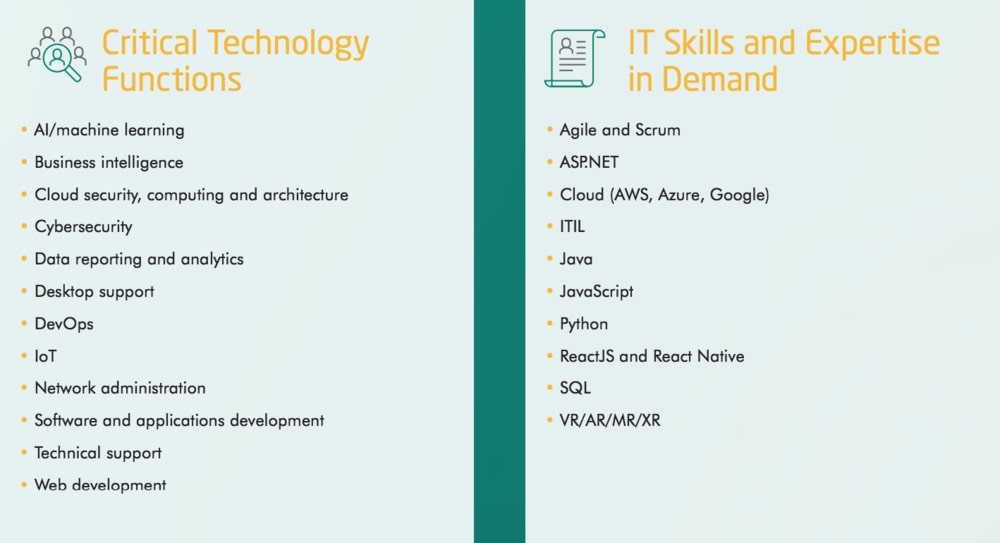 What is the salary of developers in Western Europe in 2022?

As with the US and Canada, the Western European tech market is rapidly changing. We identified the most recent 2022 salary guides for the UK, Germany, the Netherlands, Austria, and Portugal.

Methodology: This 2022 Salary Guide for the UK was specially created by surveying tech professionals, CEOs, and CFOs to identify the changes in the tech industry. The survey resulted in valuable information about the tech career changes post COVID-19.

What can be found in the report: The guide includes all the results extracted by the surveys, such as the tech market’s hiring trends in 2022, salary tables and the income variations for many industries (including development job offers), and all the major changes in each of those industries.

Report highlights: Among other things, the report indicates that 66% of UK workers feel that their career prospects are unaffected by the pandemic in the long term but are afraid of losing their job in the short term.

The study also classifies developers among the roles in demand for 2022.

Industries, skills, and roles that show strong demand in the UK

Although the average developer salaries in the UK aren’t as high as in the US or Canada, this high demand has resulted in a salary increase, especially for experienced job seekers with exceptional technical and soft skills.

Methodology: This extensive report is a result of 13,000 salary data points such as salaries specified by companies, interviews, and the key data source of the Honeypot platform. The study got rid of unusual (low or high) salaries, and for this reason, it is extremely consistent and reliable.

What can be found in the report: The study includes all the tools and info a programmer or recruiter needs to identify the changes in the tech market of Germany. By analyzing the impact of the pandemic in the industry and the salary variations between junior and senior development roles, the interviews resulted in numerous statistics, which the Honeypot data scientists translated into detailed graphs and tables. 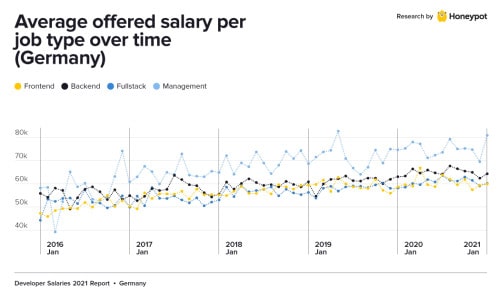 Report highlights: According to Honeypot, the average salaries in Germany vary by over 30% concerning a candidate’s experience.

As with most countries around the world, the most important factor that determines the salary of a developer is experience.  The guide indicates that Germany has some of the highest average salaries in Europe that vary from €45K to €78K per year. 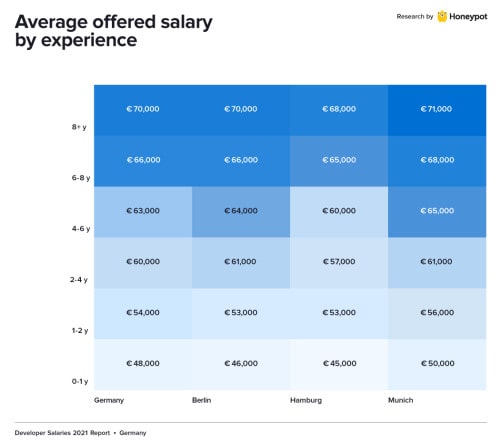 Methodology: As with the guide for Germany, the 2022 Honeypot salary report for the Netherlands utilized a big number of data points (12,000) including the average salaries, and implemented them through interviews in the key data source of the Honeypot platform.

What can be found in the report: The study includes numerous graphs and tables that can be used by both employers and developers to analyze the changes in the tech market of the Netherlands. The report refers to the impact of the COVID-19 in the country’s tech industry and concludes with valuable information about the future of different skill sets, including programming languages and frameworks. 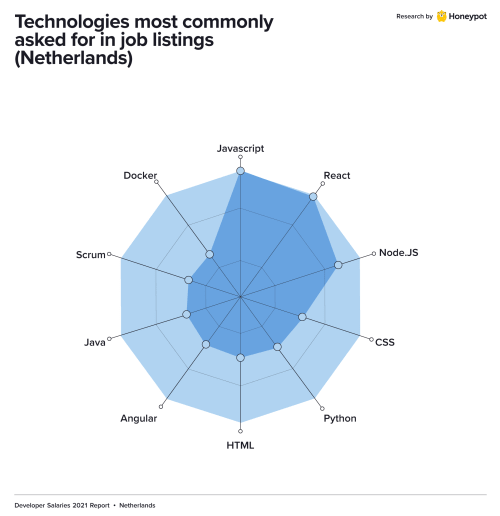 Report highlights: The research indicates that the average salaries in the Netherlands vary noticeably (more than 30%) between junior and senior web developers. Apart from that, there are not vast differences between the average salaries of a front-end (€55K per year) and a back-end developer (€56K per year). Although the salaries in the Netherlands are lower than those in Germany, the offered salaries are among the highest in Europe.

Another interesting statistic is how the average salary is influenced by the size of the hiring company. According to the chart below, companies with 51-200 and 501-1000 employees offer the highest average salaries in the Netherlands. 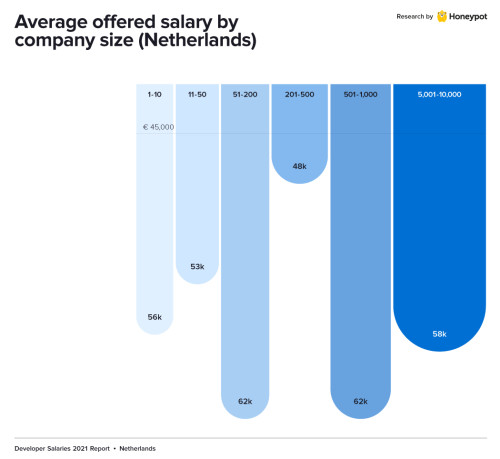 Methodology: The 2022 Honeypot salary report includes key statistics for Austria. As with the other two guides, the analysts utilized a vast number of info and interviews to create a complete review on the changes that affect developer salaries in Austria.

What can be found in the report: The report refers to the impact of the pandemic in Austria’s tech industry and provides valuable information about the developer average salaries and how they are affected by parameters like living cost, experience, technical skill demand, and company size. 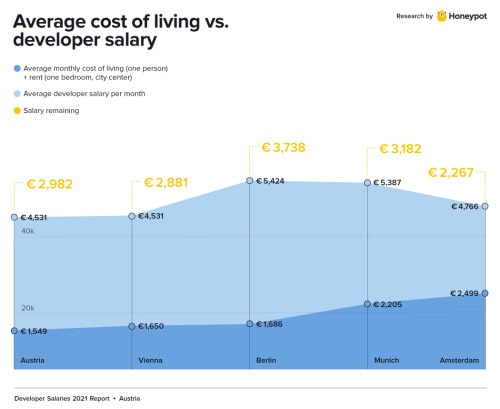 Report highlights: As with Germany and the Netherlands, developers in Austria have some of the highest average salaries in Europe.

The average developer salary in Austria for 2022 is around €54K per year, and front-end average salaries (€49K) are noticeably lower than back-end (€54K) and full-stack salaries (€54K). As with all countries, a candidate’s years of experience play the biggest role in the average income in Austria.

Methodology: With 4050 responders, Landing.Jobs created one of the most reliable salary reports for Portugal. The survey is focused on Portuguese tech professionals and was created to help companies and employees identify the trends and changes in the tech industry in 2022.

What can be found in the report: The report includes all the results exported by the survey, such as the salary differences between men and women, the changes that occurred on remote work due to the pandemic, and the tech languages that showcase enormous demand (Javascript, Java, and C#). Apart from that, the report highlights the average gross salary in Portugal per year.

Report highlights: One of the most interesting statistics that this research determined is that contractors have higher salaries (average of €48K per year) than permanent tech professionals (€32K per year). This can be explained by the different tax systems for these two categories and also similar reasons to mentioned earlier countries — companies ready to pay more for the expertise.

The high salaries in North America and Western Europe are the main reason why many companies choose to work with outsourced developers. For most startups and large companies, outsourcing or staff augmentation are an ideal option to attract development experts to work on their projects.

The unique YouTeam model has united startups and outsourcing companies into a single marketplace that helps find developers quickly. Our platform has about 300 dev shops with over 20,000 top-tier tech specialists.

Thanks to this, our data on the cost of engaging developers from outsourcing companies is the most reliable in the segment. In particular, our prices are relevant for hiring in Latin America and Eastern Europe.

If you want to consult with us on the most recent software development rates or hiring trends, feel free to book a free call with our Team Advisor.